Bachelor of Science in Nursing (BSN) Salary: How Much Does a BSN Nurse Make in 2023?


The Bachelor of Science in Nursing (BSN) degree is considered the gold standard in nursing education, and for good reason. Accredited BSN programs offer fantastic education that will provide you with the knowledge and skills you need to succeed as an RN. If you are thinking of choosing a BSN program and becoming a registered nurse, certain aspects such as BSN salary and job outlook are vital to this decision. Here, you will learn more about how much you can earn with a BSN, what kind of outlook you can expect, and how these things would differ if you choose an associate’s (ADN) degree, instead.


How Many BSN Degree Holders are Currently Employed in the United States?


What is the Starting Salary of a BSN Nurse?


The average starting BSN salary is $56,220. This represents the average amount you can earn during your first year as a registered nurse with a BSN. Things like the state, city, and your employer of choice will have the most impact on your salary immediately after you graduate.


What Is the Average BSN Salary?

The average BSN nurse salary per hour is $40.50. This amount can change somewhat depending on several factors. Not all RNs who have BSNs are paid by the hour; some – especially nurse managers – are salaried. What’s more, due to nursing shortages across the country, RNs with BSNs tend to work frequent overtime, which demands a higher hourly pay rate.

The average monthly salary for BSN graduates working as RNs tops out at $7,020 for those working full-time positions.

The average annual RN salary for those who have BSN degrees is $84,250. This number represents all BSN-educated RNs across the country, and there are several factors that can impact your personal salary. For example, RNs who have little to no experience will earn significantly less than the average annual salary while those who have worked as RNs for decades are likely to earn a great deal more. You will earn a higher salary working in a busy, populated area rather than a rural one, and if you work in a government- or state-owned hospital, you will earn significantly more than if you work in a private hospital. 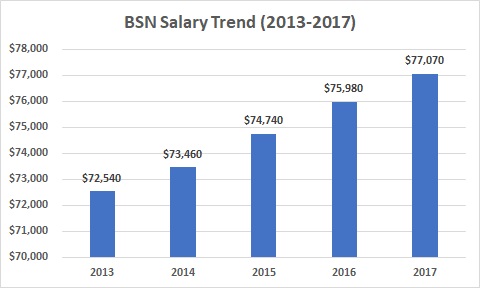 
In the next five years, even higher BSN nurse salary growth is expected. By 2025, salary is expected to climb by $8,770, or 10.41%. This is being driven by a few important factors. As the population grows, and as the larger population gains access to affordable health insurance, the demand for quality healthcare will continue to rise. Aside from this, the Institute of Medicine’s push to have 80% of all RNs educated at the BSN level by 2020 is spurring employers to prefer BSN-educated RNs over their ADN-educated counterparts, which further drives demand, requiring employers to offer higher salaries to attract RNs.


The demand for well-educated registered nurses means that the BSN nurse salary is higher than any other occupation requiring a four-year baccalaureate degree. Salaries for this profession top out at $122,350.


Your salary will also be affected by the industry in which you choose to work. Federal government pays their baccalaureate-educated RNs the most while schools pay the least.

It comes as no surprise that California is the highest-paying state when it comes to BSN nurses. The state’s population is experiencing a significant increase, and it is home to some of the nation’s best and most prestigious research hospitals, including St. Jude’s and the University of California at San Francisco. The state’s government-subsidized healthcare program is far-reaching, which means that the demand for RNs here is high.

Though Texas currently employs a great deal of BSN nurses when compared to other states, it is also in the midst of a nursing shortage. As a result, it is expected that baccalaureate-educated RNs in Texas will have access to outstanding job opportunities for the foreseeable future, particularly in high-population cities like Houston, Arlington, Ft. Worth, and Dallas. The latter is home to Baylor University Medical Center, one of the nation’s leading research hospitals and one of the state’s biggest employers of RNs.

BSN nurses in New York also have fantastic employment opportunities, especially in New York City and the surrounding area. Hospitals here serve the largest and most highly concentrated population in the country, and many of these are known for their groundbreaking research. Among these, New York Presbyterian is one of the best hospitals in the world, and it is one of the most coveted workplaces among RNs in the state.

Florida’s population is older than much of the rest of the country, which means healthcare is in especially high demand. The Mayo Clinic in Jacksonville and Cleveland Clinic Florida are two of the state’s most prestigious employers. Aside from this, nursing homes and rehabilitation centers are plentiful, and they command an above-average number of BSN-educated RNs, as does the large number of private plastic surgery practices.

Pennsylvania may not be as populated as New York, California, or even Texas, but it does provide ample opportunity for BSN-educated RNs. Hospitals like the University of Pennsylvania’s Penn Presbyterian, and Thomas Jefferson University Hospital offer incredible opportunities. Nursing homes are prevalent in PA, and home health nurses are always in high demand.

Ohio is home to some of the country’s leading research hospitals, and these draw patients from across the country. The Research Institute at Nationwide Children’s Hospital, the James Cancer Hospital, and the University of Cincinnati Medical Center are just a few examples. Ohio is also home to numerous long-term care facilities that depend on highly educated and experienced RNs to provide care.

BSN-educated RNs play crucial roles for numerous Illinois employers, particularly in Chicago, which is home to dozens of hospitals and medical centers. Northwestern Memorial Hospital and Rush University Medical Center are two of the most coveted among RNs. Doctors’ offices are also highly prevalent throughout the area, both in the Chicago metro and in its suburbs. An above-average number of RNs call private practices like these home.

North Carolina is home to the famed Duke University, which is one of the best schools in the country for aspiring RNs. Many continue to work for the Duke University Medical Center long after graduation, but others move on to other employment opportunities. These include the University of North Carolina Health Care facility in Chapel Hill, UNC REX Healthcare in Raleigh, and Wake Forest Baptist Medical Center in Winston Salem, among others.

The University of Michigan’s Michigan Medicine facility in Ann Arbor is one of the state’s top employers of BSN-educated RNs. Beaumont Hospital in Troy is another of the biggest RN employers. Michigan is also known for its selection of general care practitioners and specialists, which employ an above-average number of RNs when compared to other states.

Finally, hospitals, doctor’s offices, and even long-term care facilities in Massachusetts employ a vast number of BSN-educated RNs. UMass Memorial Medical Center in Worcester, Tufts Medical Center in Boston, and Massachusetts General Hospital (also in Boston) are among the state’s top RN employers. Massachusetts is also home to Harvard Medical School, internationally known as one of the best, which employs some of the country’s most talented, experienced, and highly paid RNs.


RNs with BSN degrees earn the highest salaries in states offering the best in the country in terms of medical research and quality healthcare, including California, Hawaii, and Massachusetts.


Between 2016 and 2020, BSN nurse employment grew somewhat erratically but steadily, nonetheless. For the entire period, 128,820 BSN-educated RNs joined the workforce, representing growth of 8.97%.


Over the next five years, between 2021 and 2025, BSN employment growth will remain about the same as the previous five-year period and perhaps even slow slightly. Many states across the nation are experiencing severe nursing shortages, and this is especially true in California, Florida, and New York. Though there are plenty of opportunities available for BSN-educated RNs in these states, there are simply not enough nurses to fill them. The projected addition of 147,294 new positions for BSN graduates, equal to 9.41% growth in this timeframe, reflects this. Employment will continue to grow, but it will grow more slowly than in years past.


Which Industries are Hiring the Highest Number of BSN Graduates?


Private hospitals – hospitals not owned by federal, state, or local governments – are by far the biggest employer of BSN graduates. They employ a total of 815,250 RNs, and physicians’ offices trails a distant second at just 100,770 RNs.


The outlook for RNs who have BSN degrees is much stronger in some states than in others, and it is highest in states with the fastest-growing populations.


ADN-educated RNs earn an average annual salary of $77,420 each year compared to the $84,250 average BSN salary. This is a difference of $6,830 a year, or 8.82%. With more specialized knowledge, highly-educated RNs take on more responsibility and command a higher salary.


Because BSN-educated RNs have been shown to lead to much better overall patient outcomes, their demand is much higher than that of their ADN-educated counterparts. Between 2020 and 2030, the employment of RNs with BSNs will grow by 16.99% compared to just 11.52% for RNs with ADNs. Because of this demand, RN to BSN programs have become increasingly popular across the nation.


48,950 More Jobs are Being Created for BSN Graduates Annually Compared to ADN


Each year across the country, only 65,030 new and replacement job openings are available to RNs with associate degrees compared to 113,980 openings for RNs with bachelor’s degrees. This is a difference of 48,950 jobs a year that offer better hours and higher pay along with more responsibilities, and it drives many working RNs to seek BSN programs that fit their schedules and budgets.


Bachelor of science in nursing salary is higher than the average ADN salary in every state. The difference is far greater in states like California ($10,400) and Hawaii ($9,050) than in less-populated areas like Alabama ($5,130) or South Dakota ($5,230).


Job openings can also vary from one state to the next, but in every case, there are more openings available to RNs with BSNs compared to RNs with ADNs. States like California (5,370) and Florida (3,150) boast the biggest difference while states like Mississippi (40) along with Idaho(70) and Wyoming (90) have the least difference.